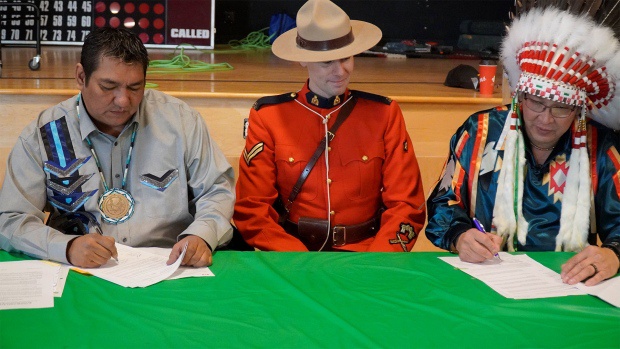 The O’Chiese and Sunchild First Nations have enacted bylaws to evict drug dealers from their respective communities.

On Wednesday, chiefs from the neighbouring First Nations signed Residency and Trespass Bylaws to give them the power to drive out illegal drug use and clean up their communities.

O’Chiese, located about 52 km northwest of Rocky Mountain House, has about 1,500 members. Nearby Sunchild has about 1,440 members.

The signing of these bylaws isn’t the first time a First Nation has taken action to evict drug dealers from the community.

In 2018, Siksika First Nation in southern Alberta banished three non-Nation members who council said were known to be involved in possessing and trafficking drugs.

In a joint news release, the First Nations said both O’Chiese and Sunchild received “overwhelming support for the bylaws from their communities after several public consultations.”

Penalties and appeals will be handled by a sanctioned body made up of seven community members from various sectors on the First Nations.