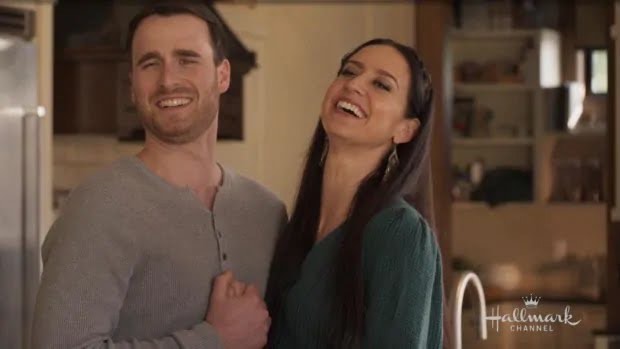 We may not have Christmas parties or visits to Santa at the mall, but there is still one holiday tradition going strong this year: the Hallmark Christmas movie, and this year's run will feature the first Indigenous woman in the main cast.

Five Star Christmas features Barbara Patrick, originally of Burns Lake, B.C., in one of the supporting leads as the member of a family who has to pose as staff at her father-in-law's fledgling bed and breakfast.

The character is also a fashion blogger, and though her Indigenous identity never comes up in the script itself, Patrick says she was asked to dress in a way that reflects her heritage as a member of the Stellat'en First Nation.

The result is subtle touches, including on screen appearances from Patrick's personal wardrobe, such as beaded mukluks and earrings made in her home community of Burns Lake.

"It's really cool," she said. "I really think that Indigenous people need to be represented on-screen and allowed to play these characters instead of being depicted in a negative or stereotypical light."

The Hallmark Channel has come under fire in past years for a lack of diversity in its annual holiday films, which are big business for the B.C. film industry. But Patrick believes the approach taken by the director at incorporating her identity into the character's look is a sign of change.

"Hopefully, I will be the first of many Indigenous people to be playing on Hallmark," she said.

Patrick's journey to the small screen started back in 1998 when as a teenager she was shopping in the "big city" at Pine Centre Mall in Prince George.

She was approached by a modelling agent about being in a local runway show and within months she had won a contest in Vancouver and was on a flight to a shoot in Japan.

"It was a whirlwind," Patrick said. "I hadn't even been into a Starbucks before."

After going out for a few roles in commercials, Patrick decided she wanted to transition into acting and eventually made her way back to British Columbia and Vancouver where she now lives.

In 2021, she will be seen in Kiri and the Dead Girl directed by Prince George, B.C.'s Grace Dove who starred in The Revenant and Monkey Beach.

But for now, Patrick is excited to become part of people's holiday tradition of sitting down and watching an uplifting Christmas tale — so long as she can find a TV.

"My parents [in Burns Lake] have actually subscribed to the channel to watch me," she said. "I might have to Facetime in with them."