For Native Peoples, Thanksgiving Isn't A Celebration. It's A National Day Of Mourning 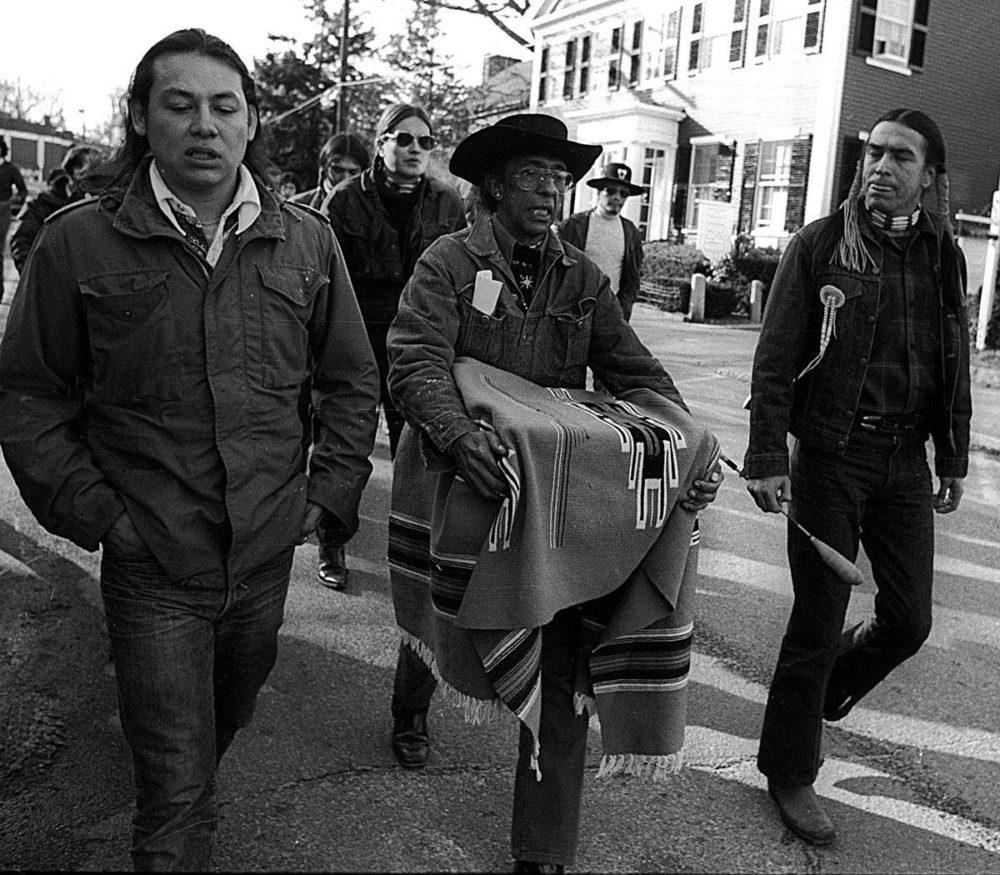 This year marks the 400th anniversary of pilgrims arriving at what’s now known as Plymouth, Massachusetts.

The so-called first Thanksgiving has been celebrated and taught to schoolchildren as the origin story of what would later become the United States. But many Native Americans say Thanksgiving Day is a reminder of the slaughter of millions of Indigenous people and the theft of their lands by outsiders.

The United American Indians of New England declared Thanksgiving a National Day of Mourning 50 years ago. In 1970, the descendants of the pilgrims wanted to hold a banquet to celebrate the anniversary of the Mayflower landing in Plymouth and asked a Wampanoag man named Wamsutta Frank James to make a speech, says his granddaughter, Kisha James.

The banquet organizers invited Wamsutta Frank James to speak on one strict condition: He needed to provide a copy of the speech in advance. Under the guise of editing for spelling and grammar, their true motivation was to check the content, Kisha James says.

Her grandfather’s speech didn’t praise the pilgrims as their descendants wanted.

“They told him that he absolutely under no circumstances could give the speech that he was planning on giving and they offered to write him a different speech,” she says. “They were quite angry about the speech he wrote because it told the truth about Thanksgiving.”

Wamsutta Frank James refused to give the edited speech, his granddaughter says. Instead, he and a group of supporters met atop Coles Hill in Plymouth on Nov. 27, 1970, to commemorate the first National Day of Mourning.

Many Indigenous people fast from sundown the night before to sundown the day-of to remember the hardship and genocide their ancestors faced, she says. The National Day of Mourning also engenders Indigenous unity, with people from around the world speaking at the event.

Thanks to the COVID-19 pandemic, this year’s National Day of Mourning will look different. Kisha James and some others will still gather at Coles Hill at noon on Thanksgiving Day to make speeches, which will be live streamed.

Most of this year’s program is prerecorded and will feature Indigenous people from South America, Canada and more. The speakers will highlight the different struggles Indigenous people face around the world, such as the Mi'kmaq tribe’s disputes over lobster trapping in Canada.

A member of the Navajo Nation — which COVID-19 has hit hardest of the tribal nations — will also speak, she says. All of the speeches will likely mention the pandemic because Indigenous communities in the U.S. have been disproportionately impacted, she says.

This Thanksgiving, Kisha James asks non-Native people to educate themselves and their families on the real history of the holiday. Take time to learn the tribe whose land you’re on, then look into the tribe’s struggles and donate to help, she says.

“Try to divorce your Thanksgiving celebrations from the Thanksgiving mythology,” she says. “So no more pilgrims and Indians, no more teaching your children about the first Thanksgiving as we learn it in public school where it was a friendly meal.”

And don’t only think about Indigenous people on Thanksgiving, she says.

As many Americans start to wake up to the realities of the Thanksgiving story, some people are receptive to learning the truth about the holiday and accept that what they learned in school is a lie, she says. But a significant amount of people accuse Indigenous people of trying to “ruin” the holiday and disrupt family celebrations, she says.

Kisha James says she doesn’t object to families gathering to eat a meal together, but rather the false mythology surrounding the day.

“We're essentially extending our hand to these people and saying, here's the truth. If you want to learn the truth and accept the truth, come with us,” she says. “And unfortunately, some people don't want to take our hand because they're committed to dying on the wrong side of history.”

“Part of it gives me hope because this is a visionary speech. It's envisioning a better America, a better world for Native Americans,” she says. “But at the same time, my grandfather's vision has still not come true 50 years after the speech. And so it just reminds me that we have a lot of work to do and we still have a long way to go for Native Americans to reclaim our proper place in this country.”

“Today we must work towards a more humane America, a more Indian America, where men and nature once again are important, where the Indian values of honor, truth and brotherhood prevail. You, the white man, are celebrating an anniversary. We, the Wampanoags, will help you celebrate in the concept of a new beginning. It was the beginning of a new life for the Pilgrims. Now, 350 years later, it is the beginning of a new determination for the original American, the American Indian. There are some factors concerning the Wampanoags and other Indians across this vast nation. We now have three hundred and fifty years of experience living among the white man. We can now speak his language. We can now think as the white man thinks, we can now compete with him for the top jobs. We're being heard. We are now being listened to. The important point is that along with these necessities of everyday living, we still have the spirit, we still have the unique culture. We still have the will. And most important of all, the determination to remain as Indians. We are determined and our presence here this evening is living testimony that this is only the beginning of the American Indian, particularly the Wampanoag, to regain the position in this country that is rightfully ours.”