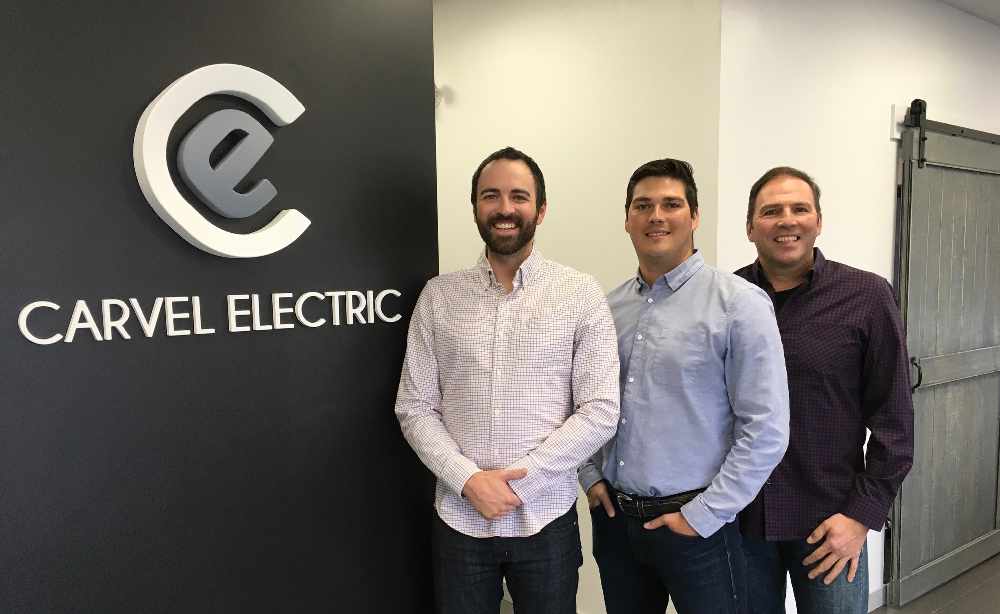 “It’s nice to be recognized for what you’re doing, especially in 2020 which has been a challenging year.” — Jordan Jolicouer, Carvel Electric’s president and CEO

Back in 1997 Sylvio Jolicouer began a side gig, starting up his own electrical company which he worked at during evenings and weekends.

Jolicouer, who is from the Métis settlement of St. Laurent in Manitoba, named his company Carvel Electric.

That’s because at the time he was living with his young family in the Alberta hamlet of Carvel, located about 35 kilometres west of Edmonton.

Jolicouer continued to operate the company, primarily out of a garden shed behind the family’s house, until 2013 when he passed along the business to his sons Jordan, now 31, and Joel, 36.

The brothers, members of the Métis Nation of Alberta, have expanded the company to the point where they now operate out of an office in Stony Plain.

And thanks to some grandiose plans where they have managed to land some high-profile contracts, Carvel Electric has made a name for itself.

In fact, the company took top honours last week in the Indigenous category for the Alberta Business Awards of Distinction.

“It’s nice to be recognized for what you’re doing, especially in 2020 which has been a challenging year,” said Jordan Jolicouer, who is now Carvel Electric’s president and CEO.

His brother Joel is the vice-president of the business while their mother Wendy works in an administrative role for the company.

Instead of being a one-man operation, Carvel Electric now has 14 full-time employees. Twelve of these individuals are Indigenous.

Jordan Jolicouer said organizers of the provincial awards did not specifically tell him why his company was honoured.

“I think we were recognized because of our Indigenous inclusion strategy,” he said.

For the past three years Carvel Electric had operated its Registered Apprenticeship Program (RAP).

Through this program company officials bring on board one Indigenous student who is in Grade 12, the final year of high school studies, at Memorial Composite High School in Stony Plain.

The goal of the RAP, similar to a co-op program, is to give a student the chance to complete their high school education while also getting some hands-on experience with Carvel Electric.

Two former apprentices now have full-time positions with the company, while continuing their education through the Northern Alberta Institute of Technology in Edmonton.

Because of the pandemic, however, Carvel Electric is not in a position to offer the RAP during the 2020-21 school year.

Jordan Jolicouer, however, said the company is eager to resume the program in the future.

During the early years of the business, Sylvio Jolicouer found plenty of work serving the electrical needs of those in First Nations communities throughout Alberta.

When his sons took over the business though they wanted to switch things up by creating a strategy to work for larger clients and to also add more employees.

“We wanted to be a top-tier company where they want to be for their whole career,” Jordan Jolicouer said.

Carvel Electric has managed to land some noteworthy gigs in recent years. The company has worked on projects with CP Rail, Suncor Energy and Trans Mountain Pipeline.

The brothers are not expected to make many significant changes to the company now.

The Alberta Business Awards of Distinction have been presented annually since 1992.

The awards recognize businesses or organizations that have demonstrated outstanding achievement and contribution to their community.

Nominees are also judged on the development of their business acumen and management practices while ensuring long-term sustainability.

Over the years more than 300 companies have been award recipients.

The provincial government presented the awards from 1992 to ‘95. The Alberta Chambers of Commerce took over the awards presentation and management in 1996 and then full ownership of the program in 2017.

Traditionally the annual awards ceremony is a large in-person affair. But this year’s event was held virtually.

There are 13 award categories now.

An additional Alberta’s Best of Business Award was presented this year. This year’s winner was an Indigenous one, the Goodfish Lake Business Corporation.