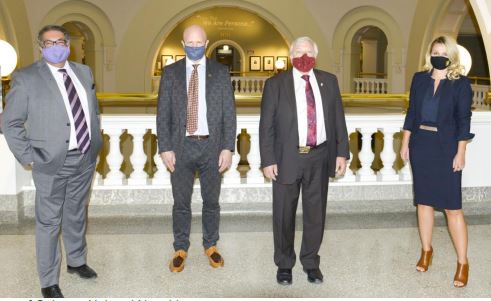 Mayor Don Scott and Regional Fire Chief Jody Butz defended the municipality’s position against consolidation of EMS Dispatch services when they met with Tyler Shandro, Minister of Health, and Tracy Allard, Minister of Municipal Affairs Thursday, at the Alberta Legislature.

They were joined in the cause by other Mayors and Fire Chiefs from Calgary, Red Deer, and Lethbridge.

Wood Buffalo’s site is one of four across the province, joining Calgary, Lethbridge, and Red Deer, who’s being centralized into one of three provincial centres.

Mayor Scott said it was imperative to explain the dangerous impacts that consolidation of dispatch services would have on our regions, and the rest of Alberta.

“It would not just impact the 9-1-1 call processing during an emergency -- it would cripple our ability to send an extra ambulance when our four ambulances are already busy,” said Mayor Scott. “Under the consolidated model, Alberta Health Services would not recognize our integrated service model. AHS would send an ambulance from an outside region – such as Lac La Biche or Boyle, rather than dispatching one from our Fort McMurray Fire Halls, where cross-trained fire fighters and Paramedics are ready to respond.”

During Thursday’s meeting, Mayor Scott explained many critical reasons why dispatch services should stay in Wood Buffalo, including:

Mayor Scott said he hasn't ruled out the possibility of legal action against the province.

The Alberta Government said the move would save around $6 million annually with AHS claiming nothing will change for those who need to call 9-1-1.