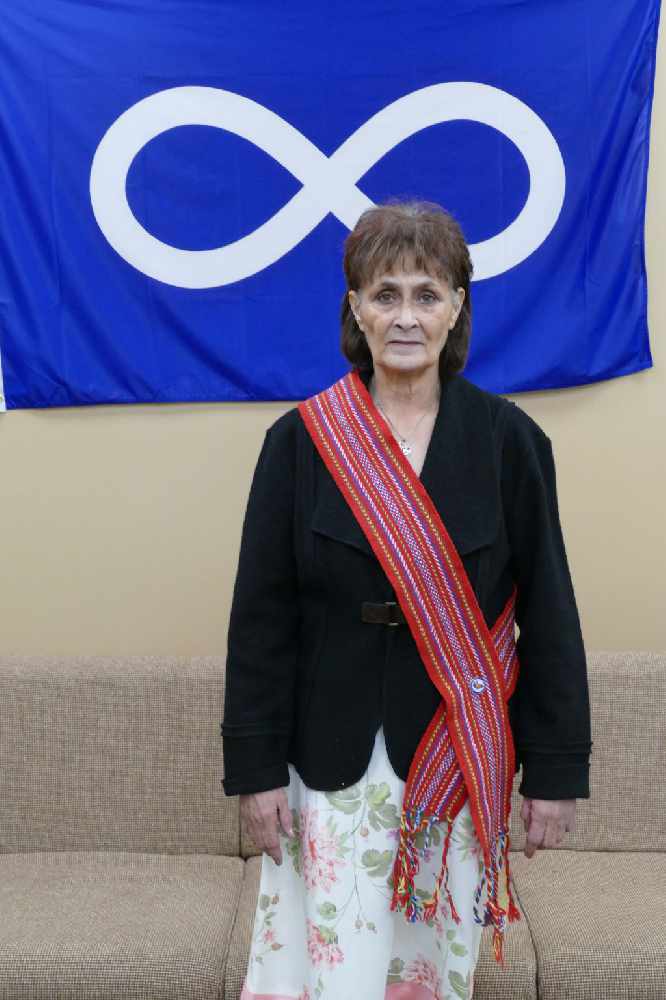 Margaret Davies is passing on her traditional Métis land use skills to her great-grandchildren. She is one of six Métis Nation of Alberta Region 5 Elders and traditional knowledge keepers featured in a recent traditional land use project.

Until Grade 6, Margaret ‘Chilly’ Davies “had to make trail through the bush” to get to school in Faust.

That winter, her feet got so cold that she cried out in pain as her mother warmed them in the stove and fed her soup and bannock. Her dad took pity on her, so he allowed her and her six siblings to ride the bus to school in Kinuso.

Faust is just off Highway 2 west of Kinuso, slightly closer to High Prairie than Slave Lake.

Davies describes her age as 70 in three years. She spends her time raising her animals, taking care of the “old folks”, and teaching the kids how to survive in the bush. She still lives on the same land her grandfather home- steaded in the early 1900s south of Faust.

Davies’ grandfather came to Faust from Wales via Oregon, she says. Her grandmother was from the area and taught her Cree. Over the years, Davies didn’t think of herself as Welsh, Native, Métis or anything, but in recent years, she’s become involved with the Métis Nation of Alberta Region 5. She is one of six Elders and traditional knowledge keepers featured in a recent traditional land use project.

In the bush, Davies has no running water or indoor toilet. She uses wood heat and has a generator which she turns on at 5 p.m. and off at 10 p.m. to keep her freezer going. She raises pigs and chickens, has “too many cats”, and a dog.

The morning she drove to Slave Lake to be interviewed she got up at 5 a.m. She fed the chickens, pigs, cats and dog. Then at 7 a.m., she jigged along to the Native perspective on the radio.

She even adds a demonstration of the jig kick she did in memory of her late brother.

Then she hauled in four wheelbarrows full of firewood.

In the evening, she collects eggs, generally about 20 from her 30 chickens, and feeds the animals again.

“I love raising chickens and eggs,” she says.

In March, she butchers the chickens and the pigs and has lots of meat in her freezer.

“They call me ‘Bush-Woman’ in Faust,” she says. “I want to be in the bush. I could make a dreamcatcher out of the bush.”

Instead of store- bought string, she harvests rope from the trees. She’s also well versed in bush survival and could hole up in the south side of an ant hill in the winter, or living on cattail roots in the summer.

Davies is passing these skills on to her great-grandkids, grand- nieces and nephews.

“I have five great-grandkids,” she says. “I play with them. I do shows with them. I act like them. I pout just like them,” which the kids don’t like.

This play isn’t only fun and games.

“I’m teaching them as I go, but they don’t know it,” says Davies.

One of the games they play is making mud pies. She shows the kids how to gather herbs and rose hips to put on top. These are all important traditional harvest foods of Métis and Cree.

“My mom made me stay for the land to pay the taxes,” Davies says.

While living on the land, she worked as a hairdresser, cook, and ran the fish plant in Faust, among other jobs.

“We made caviar for the queen,” says Davies, about her job running the fish plant in Faust.

There were 10 staff in two shifts working 24 hours a day to harvest, wash, and salt the fish eggs during a two-month period. At the moment, along with giving the occasional haircut or perm, she cleans a few houses and cabins.

Before she started working, Davies had earned her main nickname – ‘Chilly.’

“This whole town [Slave Lake] knows me as ‘Chilly,’” she says.

When she was a teenager, she was invited to a bonfire and beer party. She went, but soon got cold. She said, “I’m chilly. I want to go home.” People started to call her Chilly and she’s answered to it ever since.

“I even slept there,” Davies says, when the weather was too bad for her to make it to Faust.

For 20 years, she commuted from Faust six days a week, until she rolled her vehicle in 2003.

Davies’ interest in business started when she was young. As a child, “I wanted a little till,” says Davies. She’d play store outside with her siblings. They’d had tin cans in a snowbank, but Davies was always the one to man the store.

“I’m a craft nut,” says Davies. “I went to [the Native Cultural Arts Museum] in Grouard, before hairdressing. I was fortunate to be one” of the people who attended this course in the mid- to late 1980s.

The course was put on by Alberta Vocational Centre, which eventually became Northern Lakes College.

In 1987-88, Davies studied hair in Grande Prairie. Then she did her apprenticeship in Slave Lake. She worked for various hair salons in Slave Lake, then opened her own. Her original plan with the shop was to do hair and crafts.

“I loved hair so much, I never got to the crafts,” Davies says.

One of the things she’d do in her salon was to have a glamour week. A photographer would come with gowns, a makeup artist came in to do people’s makeup, and Davies did their hair. The women would then buy photos.

“People tell me they miss that,” she says.

“When I come to Slave Lake, I feel like a celebrity, because I’m so loved.”

The reason is simple: people tell her that it is because she’s nice to everyone.