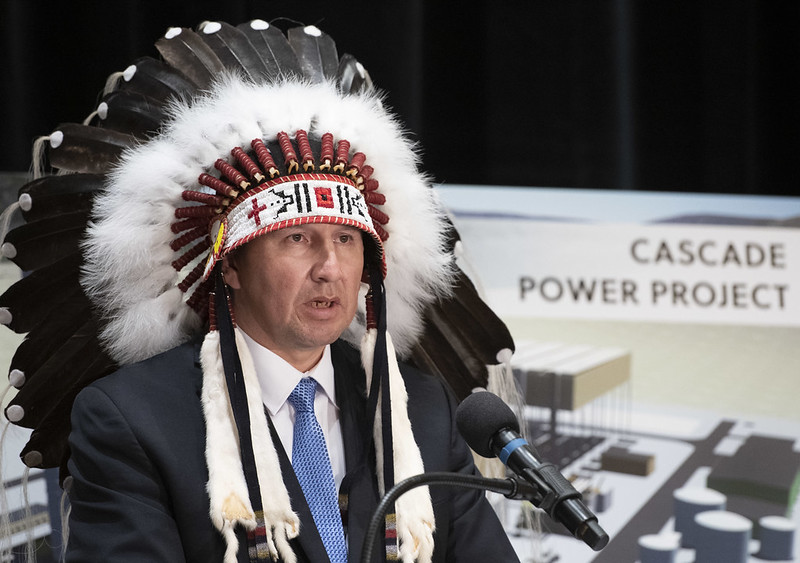 Chief Tony Alexis of the Alexis Nakota Sioux Nation. Photo supplied by the Government of Alberta.

“It is my great hope that what we have accomplished becomes a national blueprint for how major energy projects… can be structured and financed on commercial terms to include Indigenous peoples.” — Chief Tony Alexis of the Alexis Nakota Sioux Nation

The first project to get the nod from Alberta’s Indigenous Opportunities Corporation (AIOC) involves a six-First-Nation consortium with an ownership stake in the Cascade Power Project.

Construction is underway on the $1.5 billion Cascade Power Plant, located on already-cleared land southwest of Edson. The 900-megawatt plant will be a state-of-the-art natural gas-fired power facility which will meet eight per cent of Alberta’s electricity needs. Once operational it is expected to reduce Alberta’s carbon emissions by five per cent. Construction is to be completed in the fall of 2023.

“The investment into this important piece of provincial infrastructure will be transformative to the six First Nations involved,” said Chief Tony Alexis of the Alexis Nakota Sioux Nation at the official announcement by the AIOC at the River Cree Resort on Sept. 9. “The economic benefits will provide critical and tangible income for future generations.”

The province has backstopped the project with a $93 million loan guarantee. 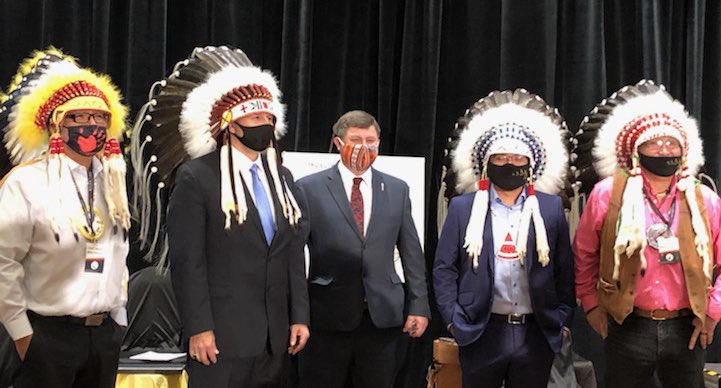 Indigenous Relations Minister Rick Wilson with chiefs of a six-First Nation consortium with an ownership stake in the Cascade Power Project.

“Very strong risk parameters are applied to these deals. These are not dollars out the door,” said Alicia Dubois, newly-appointed CEO of the AIOC. “It’s a guarantee from the government, but the guarantee is always established with the aim that the project itself is viable and it will mean success for the communities, all of the proponents and the province.”

Dubois said the Cascade Power Project was the first to get AOIC approval because it ticked a number of boxes: it was a deal brought to the AOIC by the Enoch Cree Nation and Alexis Nakota Sioux Nation; both First Nations wanted to bring a number of other First Nations on board; and it was a commercially viable deal.

The six First Nations, known as the Indigenous Communities Syndicate (ICS), are part of the McLeod River Power Group, which includes OPTrust, Axiom Infrastructure, and DIF Capital Partners. Kineticor Resource Corp. is responsible for management of the development, construction and operations of Cascade Power Project on behalf of project partners.

Paul Poscente, CEO of the Alexis Nakota Sioux Nation-owned company Backwoods Energy Services, undertook the negotiations for ICS. He said the number of participants for the project and AOIC’s risk mitigation terms all “added to the complexity” of the negotiations.

“(There were) lots of iterations in trying to really thread the needle to get the risk profile right and to make sure all the equity investors and the ICS were aligned,” said Poscente.

Over the next 30 years the plant will provide hundreds of millions of dollars to the First Nations.

“The powerful echo effect of Indigenous ownership in natural resource projects including Indigenous skills development, employment, and capacity building, but also very importantly, ownership itself, fosters a mindset and a legacy of prosperity and future-mindedness for the youth and adult members of the nations involved,” said Dubois.

Premier Jason Kenney called the First Nations’ involvement in Alberta’s natural resource industry part of the province’s plan as it moves toward economic recovery. Alberta is experiencing a record unemployment rate having been hit doubly hard by the coronavirus epidemic and the oil price crash.

“(The) vast majority of First Nations of Alberta and western Canada recognize that the economic history and destiny of their people lies in the prudent and responsible stewardship of the natural resources that lie on or below their traditional lands,” said Kenney.

Treaty 6 Grand Chief Billy Morin, who is also chief of the Enoch Cree Nation, said this partnership was 144 years in the making since the signing of Treaty 6. He said the corridor that comprises Treaty 6 began with the railway, then the highway, then the Transmountain Pipeline, which is now being joined by the expansion.

“You can only imagine what this corridor is going to look like in the generations to come with the precedent we set today with Indigenous ownership and partnership in a project like this,” said Morin.

Alexis went a step further saying he hoped this partnership would serve a larger purpose.

“It is my great hope that what we have accomplished becomes a national blueprint for how major energy projects, like the Transmountain pipeline and other infrastructure projects, can be structured and financed on commercial terms to include Indigenous peoples,” said Alexis.