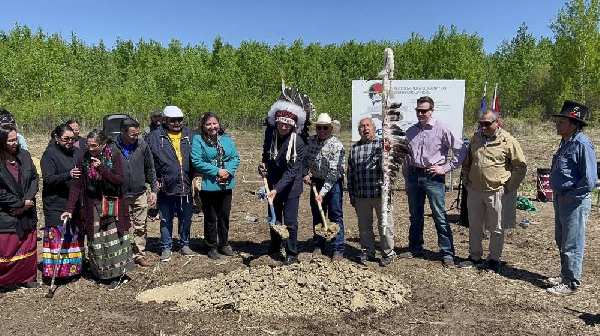 The ceremony signifies the beginning of the community centre's development. (Elliott Knopp/Windspeaker Media

The facility will allow the First Nation to keep displaced children in the community rather than having them transported to programs in other communities.

Alexis Nakota Sioux Nation is taking action to reduce the number of local children being displaced from their community.

On Monday, the First Nation hosted a ground-breaking ceremony to kick off construction of a new youth group home. During the announcement, Chief Tony Alexis claimed nearly 6,700 Indigenous children are currently under the care of Alberta Children’s Services.

“Those statistics are not good, and that’s work we have to do without counting on external sources to help tackle this problem,” he said.

“We want to do this internally, so this building is going to provide that environment.”

The centre will include 12 rooms, 2 bathrooms, a common area and kitchen. (Image credit/Alexis Nakota Sioux Nation)

Once operational, the home will allow displaced children to remain in the community where they can grow up surrounded by their culture and receive more specialized care.

Elder Martha Letendre said the project would be instrumental for the community to pass down its culture to the next generations, rather than losing them to a program in another community.

“We need our own crisis unit,” she suggested.

“We’ve got a lot of grandmothers, aunties and uncles that can take care of these children when they’re apprehended on the reserve. Instead, they’re going to a crisis unit in Edmonton.”

While the design of the facility has not been finalized, construction is expected to be completed at some point in the summer of 2023.