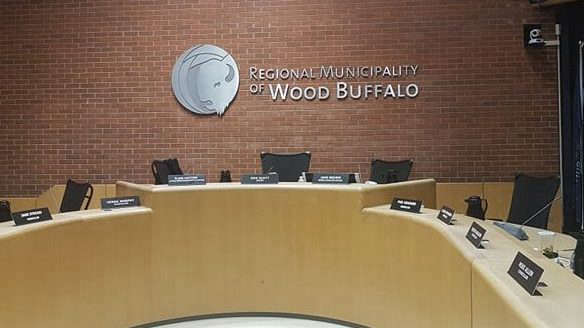 Wood Buffalo Council have called on the Integrity Commissioner to investigate comments that were made by a councillor during a live streamed budget meeting on Feb. 3.

Council held a special meeting on Feb. 4, to discuss the matter of an investigation into Councillor Shafiq Dogar’s comments made towards indigenous peoples.

Mayor and Councillors asked that Dogar resign and save the municipality from taking action with an investigation.

Councillor Dogar responded that he will not resign, and that council were being “chickens”.

Mayor Sandy Bowman commented that they will be looking at indigenous culture training as well as healing for council.

“I am deeply committed to doing everything in my power as a Mayor alongside my Council colleagues to take action and fully support Indigenous Peoples and communities in light of these devastating, hateful and divisive comments. Collectively, all of us have publicly asked Councillor Dogar to resign immediately, but regrettably he has chosen to not do so,” Bowman said in a press release.

Dogar posted on social media that what he said was taken out of context and that with his language barrier, some of the things may have gotten lost in translation.

“For what I won’t apologize for is what Athabascan Tribal Council and others in the region is portraying me to be. I never said or believe that rural indigenous community members come to town to get involved in immoral/ illegal activities. That is a bunch of lies!,” Dogar had written on Facebook.

Under the Integrity Commissioner Bylaw, the Commissioner will receive, review, investigate and adjudicate complaints based on the formal complaint procedure outlined in the Code of Conduct Bylaw.

“During the meeting Councillor Dogar publicly stated that he did not support the motion because Indigenous people in Wood Buffalo reside in the rural areas and only come to Fort McMurray to get drunk, or fight, or have other legal issues,” summarized Karla Buffalo, CEO for Athabasca Tribal Council. “This is hate speech. Wood Buffalo’s Council Chambers is a place for reconciliation, not harmful statements and division.”

This statement was also factually untrue. According to the 2016 Canadian Census 5,195 Indigenous people make the Urban Service Area of Fort McMurray their home. “In his response we heard derogatory, prejudiced and outright racist comments,” continued Buffalo.

ATC Calls Upon the RMWB to take the following actions:

“As Mayor of the region and on behalf of my Council colleagues, I’d like to formally and sincerely apologize to all Indigenous people and communities in the region following insensitive, inaccurate and hateful comments made by Councillor Dogar earlier today during a public Council meeting for the 2022 municipal budget. We completely disagree with these comments and are shocked and saddened by what took place.

During debate on a motion made by Councillor Cardinal regarding prevention and awareness initiatives for murdered, missing and exploited Indigenous women and people, Councillor Dogar publicly stated he did not support the motion because “Indigenous people reside in the rural areas and only come to Fort McMurray to get drunk, or fight, or have other legal issues.” These hurtful and divisive comments are completely unacceptable, incorrect and difficult to comprehend.

Unfortunately, and regrettably, due to a language barrier I did not fully understand the comments from Councillor Dogar at the time when they were made. Now, having opportunity to again hear the comments and in dialogue with Indigenous leaders in the region, I am truly sorry and shocked that our Council chambers – which I believe should be a place of reconciliation at all times – was the venue for these comments.

As Mayor, I am formally committing to further Indigenous cultural awareness training and will be asking all my Council colleagues to join me in this training in a spirit of reconciliation, learning and healing.

I also understand that Athabasca Tribal Council and others in the region are calling for Councillor Dogar to resign from Council. As Mayor, I do not have the power to unilaterally remove a democratically elected Councillor from office, however I will be joining in this call for Councillor Dogar to personally apologize and resign and will be discussing with Council our options as next steps.

Our Indigenous people deserve better and so does our region.”