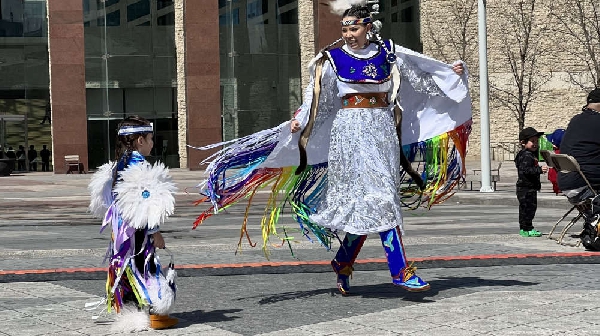 The annual event challenges men and boys to support ending violence toward women and children.

A large gathering assembled outside City Hall Thursday afternoon to participate in a nationwide initiative against violence.

The City of Edmonton, in collaboration with the Indigenous Sport Council of Alberta (ISCA), hosted its first ever Moose Hide Campaign, a nation-wide event encouraging men and boys to stand up against violence toward women and children.

In an interview with the Windspeaker Radio Network, ISCA Executive Director Jacob Hendy said the campaign bears importance to him as a male because of the women in his life.

“I have my mother, two sisters, my wife, three daughters and two sons,” he shared.

“I've talked to my oldest son about this, and my youngest, to be able to show them that other people are making the stand, and make a commitment to treat his sisters and mom good and have that respect. It's very important to lead by an example in my family, and then to support that and call it out.”

A crowd has gathered outside of City Hall to participate in Edmonton’s first-ever Moose Hide Campaign, a nation-wide movement challenging men and boys to speak out against violence toward women and children.

Mayor and Council are among many in attendance. pic.twitter.com/swIliCDKjk

The Moose Hide Campaign was created in 2011 by  and his daughter Raven while traveling for a hunting trip along the Highway of Tears, an area in Northern British Columbia recognized as a site where many women went missing or were murdered.

While harvesting a moose, they had the idea to cut the hide into small squares and make pins as a visual reminder to end the violence.

According to the campaign, more than 3-million pins have been handed out across North America.

Mayor Amarjeet Sohi and members of Council joined together to announce a formal proclamation designating May 12, 2022 as Moose Hide Campaign Day.

Moose Hide Campaign pins and informational materials were offered to members of the public interested in participating in the movement.

Seen below is a capture from the second drum performance of the afternoon. pic.twitter.com/2HpXuW3W0H

“It's important that we ask them to protect our women because we are such key roles in the family,” she commented.

“They build the families, birth the children, they do a lot for us. So why are they getting hurt? Why is there violence towards them still? That's what's really important about this event, just asking our men to take a step forward and help us end this.”

Anyone interested in making the pledge can join the movement online through the Moose Hide Campaign website. They can also register their community to participate with a gathering of their own and order moose hide pins.

Listen to the radio story here: