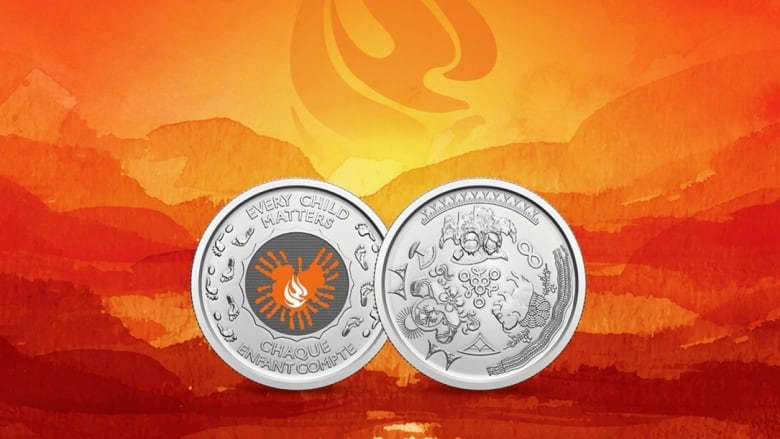 "By ordering keepsakes for their family, friends, or colleagues, Canadians can humbly wear it as a way to signal that they stand with Survivors and remember the children who never returned"

The Royal Canadian Mint has unveiled a deeply symbolic keepsake that acknowledges the truths behind the residential school experience on First Nations, Inuit and Métis children and their families, and supports our commitment to fostering reconciliation.

The coin was developed in partnership with the National Centre for Truth and Reconciliation.

The Royal Canadian Mint says it represents a past that we must not forget, as well as a better future.

Honouring the Survivors and children who never returned, the Truth and Reconciliation Keepsake helps educate Canadians about the intergenerational impacts of Residential, Day and Boarding schools. It invites reflection and conversation about the impacts of those schools, the conditions that created them, and how people living in Canada can turn reflection into acts of reconciliation.

Both sides of the keepsake feature richly symbolic imagery, reflective of First Nations, Inuit and Métis teachings and traditional art forms. Its design is the result of a unique collaboration between artists Leticia Spence (First Nations), Jason Sikoak (Inuit), JD Hawk (Métis) and Survivors to weave a thoughtful and compelling story of the Residential School experience for Indigenous communities across Canada.

On one side of the keepsake, the three artists created a collection of visual elements that form an expression of Indigenous cultures and perspectives. First Nations rights, culture and teachings are represented by the natural element of the sun and traditional teepee lodgings; a tikanagan (cradle board) held and supported by two people, as a symbol of connection and traditional family support across generations, this is also supported by symbols of water, and a stylized fireweed flower; and to the left, a triangular motif inspired by parfleche (a rawhide carrying bag) designs.

The Inuit perspective is represented by traditional tattoo line work that was taken away by colonialists and is now coming back as a sign of pride; the northern lights that symbolize Inuit Nunangat and reflect the beauty of the North; a brother and sister—a representation of those who were sent to residential schools—facing the challenge that lies before them; and to the left, an ulu which is a traditional curved knife that is used in the North. The Métis Nation is represented by the Métis sash that signifies connection—to nature, to the past, to each other; a beadwork flower representing resilience amid thorns that signify pain and suffering; the bison, a symbol of strength and determination, bravely facing east to confront the approaching colonizers; and to the left, the infinity symbol that represents the joining of two cultures, First Nations and European, and their permanent existence as a people.

The other side of the keepsake bears messages of powerful significance: "EVERY CHILD MATTERS" is prominently inscribed in English and French. To the left and right, pairs of footprints, represent ancestors walking with younger generations. At the centre of it all, orange-coloured hand prints form the shape of the sun—the life-giving source of light and heat. Within the hands is the flame motif from the National Centre for Truth and Reconciliation logo, an acknowledgement of the spiritual flame that is born inside a person, while the hands are encircled by a border representing the radiating waves of the sun's light and heat.

The 2022 Truth and Reconciliation Keepsake, which sells for $9.95, can be ordered directly from the Mint at 1-800-267-1871 or on the Mint's web site at www.mint.ca. It is also available at participating Canada Post locations.