Wally Desjarlais playing Five Roses - Might As Well Be Me 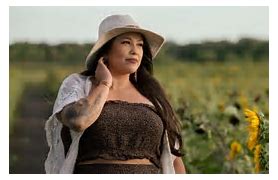 Desiree Morrisseau-Killick of Make Up by Desiree has a passion for making people feel beautiful. Desiree, who is Anishinabe from Winnipeg, uses her platform to create connections and bring awareness to issues of inequality and social justice.

For Desiree, her career and passion are merged. She runs her makeup business part-time and is well-known for her work within the wedding industry and for giving back to her community.

But Desiree has taken her makeup artistry one step further as the creator of Sisterhood, a photography series that focuses on empowerment, highlighting an array of strong, beautiful and diverse Indigenous women. Desiree’s Sisterhood series is about connecting Indigenous women through the art of photography, makeup and storytelling.

“I went with a photo series because I thought it would be super impactful,” she explains.

“I was inspired by an artist named KC Adams, an Indigenous artist based out of Winnipeg. In 2017, she did a photo series called Perception that was on bus stops and billboards across the country, based on stereotypes that Indigenous folks face. I work as a makeup artist working especially with women, and wanted to take the opportunity to utilize my creativity and passion and bring forth a project like Sisterhood. I did the makeup and got a friend, Chelsea Francisco of Chunky Photography, to do a before and after of all of the models.”

Desiree has received a lot of positive feedback from women who now see people like them portrayed in a positive light on public platforms like social media, breaking through stereotypes based on their looks.

“It feels good to know that women are proud of me, and that the series has impacted them in such a positive way,” she said.

When asked what advice she would give to young people interested in a career as a makeup artist, Desiree says, “Follow your heart. Do exactly what you're meant to do. Sometimes we get stuck comparing ourselves to other people, and it's important to focus on what makes you happy.

“I don't really like to measure what success is. I think it's all about happiness. Are you doing something you love? Does it bring you laughter? Are you passionate about it?”