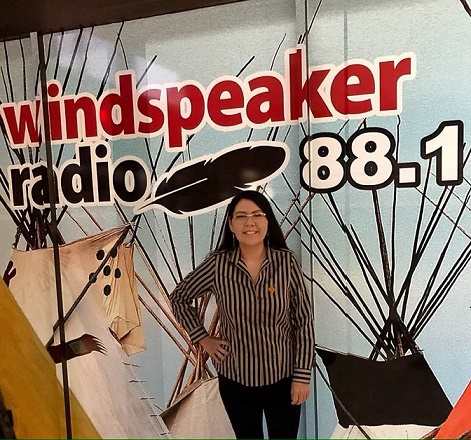 Lowa Beebe is a speaker, facilitator, advisor, consultant, writer, and she also leads workshops in creating spiritual and conscious awareness.

Lowa is Blackfoot/NezPerce from the Piikani Nation of the Blackfoot Confederacy and Treaty 7 in Southern Alberta. She is recognized for her work in public relations, advocacy, media, strategy, and communications, and has amassed an incredible social media following in excess of 40,000 followers.

“I really grew up in a traditional Blackfoot family. I was involved in powwow and our Blackfoot sacred society ceremonies,” she says. “My grandfather had a very big hand in shaping who I became. I definitely looked up to him. He was one of our society leaders in our medicine pipe bundle and a tipi owner at the Calgary Stampede, which was a big part of my life.”

Lowa, who is the owner and CEO of Naato’si Design and Consulting Ltd., was educated at Lethbridge Community College and Athabasca University. She is very active in the community as a volunteer and advocate for Indigenous rights in Canada.

Working as a tour guide for five years at the Buffalo Jump in Fort MacLeod was a valuable experience.

She went back to school for post-secondary studies in Business Administration, moved to Calgary in 1996, and had an 11-year career at Telus Communications. She also has experience working directly with chief and council, consultation offices, land, and administrations.

You can listen to Lowa on Windspeaker Radio during her one-hour show every Friday at 9 a.m.