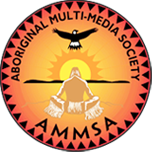 The Aboriginal Multi-Media Society of Alberta (AMMSA) is a communications society dedicated to serving the Music, news and information needs of Indigenous people across Canada.

Incorporated in 1983 under the Alberta Societies Act, AMMSA has steadfastly maintained its commitment to the quality of its products and its people and has served as the model for other Aboriginal communications societies.

The Aboriginal Multi-Media Society is independent and committed to facilitating the exchange of information reflecting Aboriginal culture to a growing and diverse audience.

AMMSA is dedicated to providing objective, mature and balanced coverage of news, information and entertainment relevant to Indigenous issues and peoples while maintaining profound respect for the values, principles and traditions of Indigenous peoples.

On August 12, The Aboriginal Radio and Television Society was granted a licence for a Native and English language FM station at Lac La Biche, operating on 89.9 MHz with an effective radiated power of 10 watts.

CFWE-FM went on the air. It was the only local radio service in the region and operated a community radio training program in conjunction with Employment and Immigration Canada.

On September 1, the CRTC approved an application to change the authorized contours of the English-and Aboriginal-language Native Type B radio station CFWE-FM-4 Edmonton. CFWE proposed to increase the effective radiated power from 9,300 to 100,000 watts and decrease the effective height of antenna above average terrain from 162 to153.7 metres.

On September 6, the CRTC approved the application by Aboriginal Multi-Media Society of Alberta to amend the licence for CFWE-FM-4 in order to operate an FM rebroadcasting transmitter at Grande Prairie. The new transmitter would operate at 105.7 MHz with ERP of 100,000 watts

In the summer, CFWE began testing its Grande Prairie transmitter at 105.7 MHz with 100 kW ERP.

On December 12, the CRTC approved CJWE’s application to add the transmitter CFWE-FM-2 Peigan/Blood Reserve Porcupine Hills. The transmitter had been a rebroadcaster for CFWE-FM-4 Edmonton. The transmitter would continue to operate at 89.3 MHz with an average ERP of 2,300 watts (maximum ERP of 10,200 watts